My first impressions on Everquest 2 Extended

I started playing "Everquest 2 Extended"  this past winter, mostly because I got envious of my husband having this awesome housing in the game he was playing. It's a great reason to try a game, right? Now I got hooked into the game, but still just starting to understand it.

The very first impression back then, after reading a couple of tutorial screens, was that gathering nodes were absurdly abundant. I was simply surrounded, while exploring the little area I had been given as a start point. Also, clicking them was enough to start gathering, and I could gather EVERYTHING, no limitations or needing to train a specific skill first.
Some good minutes later, I get out of my gathering amazement and try and quest and check what the game is about.
Quest text comes in little pieces, as you talk and answer to the NPC, which creates a nice dialog experience, dragging the game back to an RPG feeling. You get dialogue options, even though they don't really affect much in the end, it is quite amusing the answers you can give to an NPC to deny a quest instead of just cutting a window to not join it. After the dialog, it is shown a window with the quest details, rewards and the option to accept it or not.

Each starting zone will give you gathering and crafting tutorial quests. So yeah, don't go crazy like me on the gathering nodes before you get the related quest, since you'll be requested to gather many kinds of different resources. 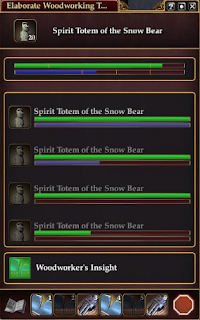 As you level up, spells come automatically to you, no need to go to a trainer every so many certain levels to get new spells. What trainers will actually have - and those are found in big cities -  are additional optional spells, such as summoning food for templars and a non combat eagle companion for rangers. Also, some combat tips.
Crafting works very different from the games I've been playing. First impression: this is not an AFK crafting system. You have to actually be there to craft, to counter events or accelerate/slow down the craft, so that the item creation succeeds. It's a mini-game, and while it makes crafting more time consuming, I enjoy it.
Spells are upgraded as you gain levels, but some of them will require you to research (past lvl 20). It's pretty simple, you'll have a list of possible upgrades, and they'll only take time to be yours. Or you can craft/buy the upgrades, which are made by alchemists, jewel crafters and sages.
One of the things I love the most in this game is the alignment system. Your character race options are divided between Good, Neutral and Evil.

Good and Evil characters have to choose between 2 starting areas, while Neutral characters will have to choose between the total of 4 starting areas. Choosing a Good or Evil city will determinate the choice of alignment for Neutral characters.
But the reason I love this system is the fact that there is no unending mindless war going on. There isn't a forced way to prevent characters to work together if they so wish. The division is about their alignment, which only affects cities they can go and deities they can pick. So if my evil and twisted ranger wishes to go have tea with a goodly fae, that's fine. We are not forced by the game to hate each other. We can join guilds, groups and raids if we so wish. No faction drama: I love it.
And as I mentioned, there is an interesting deity system going on. A veteran in this game would have more details, but it seems that the events that made the EQ2 world shatter made the gods go away. They've been coming back slowly, and you can pick one to pray for, which will grant you some long cooldown skills, an altar for your home (where you do offerings and collect the said skills) and later on an exclusive cloak and helpful pet. So as far as I'm understanding the system and the lore, more may be added soon. Also, I've read that along with the remaking of a certain city (Freeport), they will be changing the deity system too, but they gave no details on that (source)
The one tip I'd give is to join one of the many guilds from the recruiting system. That's how I learned many of the details that got me lost, and also how I managed to spend many months without spending a dime on my account, since they gave me this huge bag that made the bag slot limitations quite not limiting.

Other little things worth mentioning:
* You can gather while mounted.
* When you dismount for combat or to swim, the mount will automatically come back when you are out of combat or out of the water.
* Your first mount is given at around level 20, for free, by finishing one of the starting areas.
* There are collectibles. Sparkly things with a "?", that you gather, collect, and exchange for rewards.
* Your first house is given for free, in the city area you chose to start.
* You can change citizenship and alignment in the game. Just takes effort and patience.
* Automatic traveling is extremely fast and free of charge.
Overall the game felt quite complex back when I first tried it, with many things that took me a while to understand. It has, so far (my highest character is lvl 29) enough quests so that the level up grind is entertaining enough. Some quests are actually intriguing if not just plain funny, with each zone getting very different story lines. Hidden quests are present, where you have to mouse over an abject to realize you can interact with it to start a quest, which also rewards you for exploring beyond the quest indicated areas.
Later I'll post my impressions on each of the starting zones.
By Carolina at May 31, 2011 8 comments:

After reading many personal blogs and news blogs focusing on games, I decided to have a place to post my own opinions and hopefully find people to talk about those games. I'll be posting both here and at mmovoices.ning.com when it is about games, but if I feel like sharing and actual dessert recipe or a good book, I'll keep it here.

Right now I've been trying to focus on "EQ2: Extended" and "Lord of the Rings Online", but I will get dragged to other games, such as "Vindictus", "Champions Online", some beta tests, and other games that are not online, such as "The Sims 3" house building.
English is my second language, so please be patient with me and my sometimes Yoda-like expressions. Suggestions and corrections are welcome, so don't be shy to point out how many times I use "then" instead of "than", I need to learn it anyway!
Personal Preferences
I believe a good start would be to list here and comment about features I like in games. I favor game play quality over looks, which means older games are still on my list. But at the same time, I hate lack of cosmetic options in games. I am not a competitive player, but will occasionally join PvP matches just for the chaos and speed of it.
Customization options is something I'm using to sometimes shorten my list of games I'd like to play. Being able to have a character that looks the way I want is quite basic to me, since it brings the RPG part of the game back, where I can decide if I'm an archer clothed to match the wilderness or a mage with flowing purple robes, instead of mixed quested gear that makes no sense.
Game graphics can be older, not very sharp, but if the animations are still well done, that's a big thumbs up. I'm the kind of person that will pick a character race based on how good or bad the animations look for the class I'm wanting to play, since I will basically be staring at that quite often. I hope soon they develop a game where they'll actually let us pick from a group of different animations. Won't have my hopes too high on that though, since whenever I read about people wanting a change in that on some game, it is said to be a quite expensive deal for the developers.
I also like to match crafting with what my character does. I do understand that crafting in some games can be a good way to increase how much money you have, but that comes secondary to me. I wouldn't have a warrior tailor just because it's profitable.
Hunting kobolds and evil faeries is fun, but I like games that have more than killing as something to be done. Housing, collections and mini-games are extremely welcome.
And then all that has to mesh into a good, expansive game world. Those that are able to make me get lost in the virtual world are a big plus. Worlds rich in detail, where you'll find something to be done or discovered when you venture beyond the area the quest givers/objectives are directing me into, bring to me a piece of "RPG" back into MMORPG.
I believe those are some points that tell a bit about my gamer self. Suggestions of new games are always welcome, even if it might not match these things I described.
By Carolina at May 27, 2011 No comments:

I got curious enough to check it out myself. The first reviews I've read almost made me not want to put 1 hour of my time into it, but...